An Afternoon with Oklahoma Authors - December

This event is free and open to the public. It will be from noon to 2 p.m. Saturday, December 3rd.

Come meet them and get your books signed! 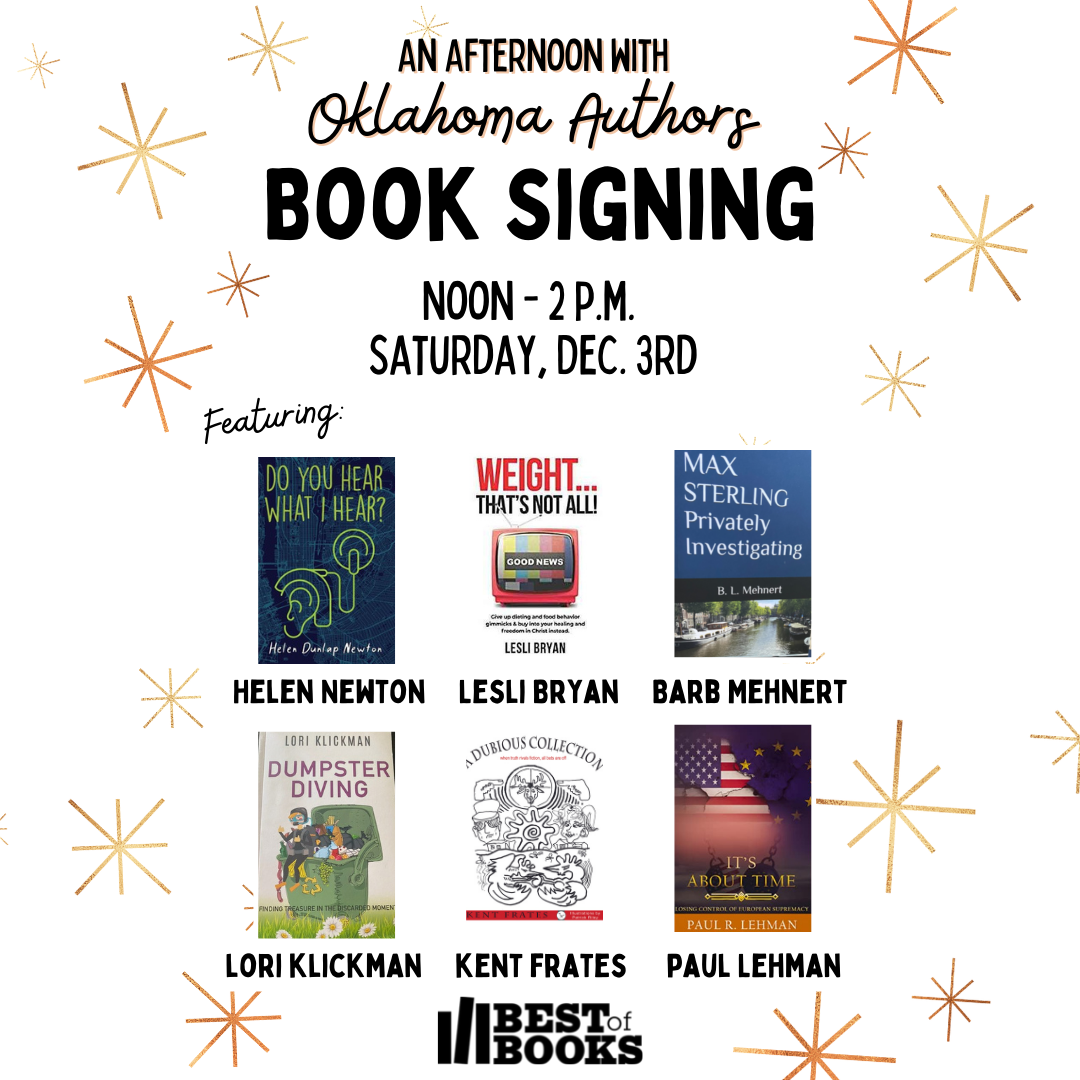 About the authors and their books:

Helen Dunlap Newton, a veteran middle grade language arts teacher, has been a serious writer for children since she became involved in the Society of Children's Book Writers and Illustrators (SCBWI). Her debut middle grade novel, NIGHT OF THE AMBER MOON, was published in 2021 by Yorkshire Publishing and was a 2022 finalist for the Oklahoma Book Award. In addition to writing, she enjoys reading, music, and helping her husband care for their plants and backyard chickens in Tulsa, Oklahoma. Her novel, "Do You Hear What I Hear?", begins after a tragic accident leaves Noah Baker deaf, and now he has the chance to regain some of his hearing with a cochlear implant. Upon activation, however, he finds out he's able to hear a whole lot more than just sound waves - he's able to hear the thoughts of others. Now Noah has a secret power to deal with on top of everything else in his life! When the government finds out, they attempt to recruit Noah for a top-secret mission. Will he and his snarky partner, Lena, succeed or will Noah's abilities get them in more trouble than they bargained for?

Lori Klickman is an author and speaker who lives to encourage others. She is the founder of Outside of Ordinary, a ministry providing workshops and conferences for women. She believes “Any day can be extraordinary when you step outside your circle of expectation”. She is currently active in teaching and leading small groups at Crossings Community Church in Edmond. She loves to laugh and believes whole-heartedly that God does too! She lives in Edmond with her husband, Keith and dog Ollie. Her novel, "Dumpster Diving", includes adventures such as vacuuming up a snake, frogs in the kitchen, sending her son to war, beauty product foibles and a bicycle tour in Paris.

Barbara L. Mehnert: Barbara was raised in the Midwest surrounded by devoted family, great classmates, wonderful neighbors, and friends. After fifteen years practicing as a Licensed Professional Counselor, she retired and focused on another long-time personal interest – writing. Understandably, her former work influences the stories she tells. She has lived in a few different parts of the country, but currently lives in Oklahoma with her husband where she enjoy gardening, volunteering, and working as a substitute teacher. Her novel, "Max Sterling Privately Investigating", follows Maximus Atticus Silver British Sterling, a handsome, single, forty-year-old, private investigator working on the disappearance of a graduate student. His previous employment experience offers a wide range of failures and he's currently at a financially low point. He doubts himself and inspires little confidence in the people he meets. How will he manage to locate and safely return the young woman he's searching for? It doesn't help matters that the missing person does not want to be found. Along his journey he meets friends of the missing girl who enlighten him about a brutal beating of their classmate. He contacts the University professor who informs him about the murdered research subject. The clues of the case lead Max to Amsterdam, and presents the companionship of a particularly friendly working woman. Strap in for a crazy ride with Max across the U.S.A. and into Europe.

Growing up Lesli Bryan loved interior decorating and dreamed of becoming a top designer one day. Life threw her a few curve balls, and she dove headfirst into an eating disorder which changed her life's trajectory. In the midst of Lesli's journey, she found the deliverance, healing and freedom she was looking for through Jesus Christ. Her heart and life were completely transformed, and a new path was set in front of her. She soon developed a passion to help others get to know Christ in a way that would set their hearts free too. This "good news" was just too good to keep to herself. She would have never dreamed she'd write a book one day about the God-given strategy the Lord gave her to overcome an eating disorder. It's not a very glamorous spotlight, but much needed. Lesli's desire is to give others the same hope and practical tools the Lord gave her. Lesli and her husband are active in their church both serving on the prophetic and prayer team. They love to minister together as a team and speak life and purpose into the hearts of God's people. To learn more about Lesli you can follow her on Twitter @LesliABryan, Instagram lesliabryan and LIKE/FOLLOW her Facebook page @WeightTNA titled - Weight That's Not All. In her novel, "Weight That's Not All", Lesli Bryan shares a God-given strategy that helped her completely overcome her battle with anorexia and bulimia. By placing her faith in Jesus Christ, she experienced the redemption of her soul from an eating disorder, and now you can too.

Kent Frates is an Oklahoma City attorney and author. He is currently of counsel with the firm of Hartzog, Conger, Cason. Mr. Frates served in the Oklahoma House of Representatives from 1970 to 1978 and was Minority Leader from 1976 to 1978. He is the editor and publisher of the political and literary newsletter Common Sense. He was the coeditor and copublisher of the newspaper “Sports Source” from 2001-2006. He is the author of a poetry book “The Captain and His Crew”, a novel Don’t Never Shoot Short, and four works of non-fiction, “Oklahoma Courthouse Legends”, Oklahoma’s Most Notorious Cases”, “Oklahoma’s Most Notorious Cases, Volume II” and “Oklahoma Hiking Trails” (with Larry Floyd). He has also written numerous magazine articles published in Oklahoma Today, This Land, True West, Wild West and Red Dirt Forum. He also wrote the original script for the movie “CockFight”, an independent film, filmed in Oklahoma, starring Wilford Brimley, Rex Linn and Gailard Sartain. His book “Oklahoma’s Most Notorious Cases” was a finalist for the Oklahoma Book of the Year award in non-fiction. The book also won the Ben Franklin Award 2015 for political/current events. The Ben Franklin Award is a national award presented by the Independent Book Publishers Association.

Known for his nonfiction books “Oklahoma Courthouse Legends” and the award winning “Oklahoma’s Most Notorious Cases Vol. I and Vol. II” in his new book “A Dubious Collection” Kent Frates tries his hand at spinning some Oklahoma yarns based on his experience as a lawyer and state legislature. A corrupt sheriff, a penny-pinching doctor, a conniving politician and a cockfighting ex-con are just some of the colorful characters involved in schemes both legal and illegal. Whether comedies or, tragedies, the stories are always flavored with a strong dose of reality. Frates also sprinkles the book with poems with an Oklahoma or Western theme. Also, featured are drawings by noted Oklahoma artist, sculptor and mask maker Patrick Riley. Riley’s drawings catch the spirit of the book, using his imagination to mix fantasy with reality to create some memorable images.

Dr. Paul R. Lehman, who earned a PhD from Lehigh University, 1976, is a university professor emeritus and former dean of the graduate college at the University of Central Oklahoma and a
former CBS affiliate news journalist and weekend anchor. He presently resides in Edmond, Oklahoma. He has two sons, both doctors: Christopher, in ethnic studies, and Jeffrey, in musical
arts. Dr. Lehman has received many honors awards for his teaching and community work. He has lectured throughout Oklahoma as well as other states across America. He has published scholarly books, scholarly and creative articles, poetry, short stories, interviews, book reviews, and books. Recent publications include The Development of a Black Psyche in the Works of John Oliver Killens, The Making of the Negro in Early American Literature, America’s Race Problem: A Practical Guide to Understanding Race in America, America’s Race Matters: Returning the Gifts of Race and Color, Flannery O’Connor: Southern Racial Culture and African American Characters.

An Afternoon with Oklahoma Authors, Saturday, December 3rd from noon to 2 p.m.

SANTA will be visiting, December 10th from 11 a.m. to noon

This feature require that you enable JavaScript in your browser.
END_OF_DOCUMENT_TOKEN_TO_BE_REPLACED

This feature require that you enable JavaScript in your browser.
END_OF_DOCUMENT_TOKEN_TO_BE_REPLACED