The first forty (40) people to purchase a ticket to this event will also receive a signed bookplate from both authors—so don’t wait to get yours now! Register HERE. 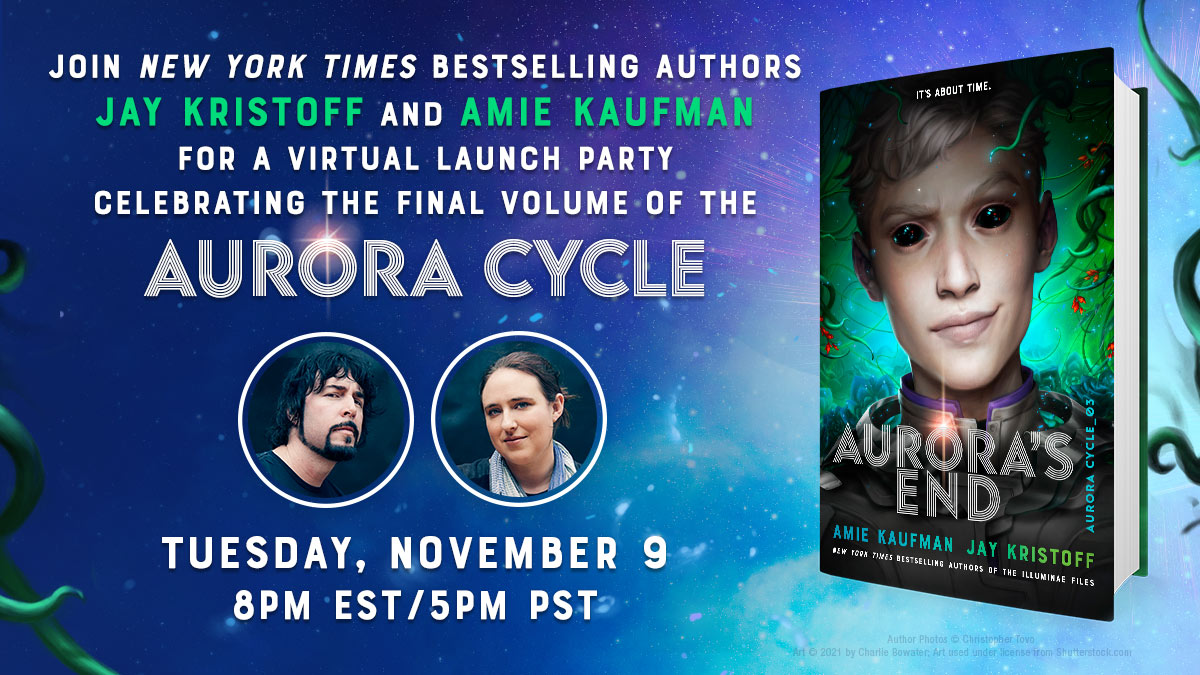 When we last saw Squad 312, they were working together seamlessly as an intergalactic battle raged and an ancient superweapon threatened to obliterate Earth. Everything went horribly wrong, naturally. But as it turns out, not all endings are endings, and the team has one last chance—maybe two—to rewrite theirs.

In this highly anticipated finale, our favorite team of losers, discipline cases, and misfits find themselves lost, separated, and in way over their heads. There’s Zila, Fin, Scarlett, and Magellan, making friends, making enemies, and doing their best to make history. There’s Tyler, Kal, and Auri, attempting to unite two of the galaxy’s most hated villains. And then there’s the galaxy, which is not doing too great. Saving it will require a miracle, and Squad 312 is fresh out of those.

Amie Kaufman and Jay Kristoff are the New York Times bestselling co-authors of the Illuminae Files and the Aurora Cycle. Amie has also co-written (with Meagan Spooner) the Starbound and the Unearthed trilogies. Jay is the author of the LIFEL1K3 series, as well as the Empire of the Vampire, Nevernight Chronicle, and the Lotus War series for adults. Collectively, Amie and Jay stand 12'5" tall and live in Melbourne, Australia, with two long-suffering spouses, two rescue dogs, and a plentiful supply of caffeine. They met thanks to international taxation law, and stuck together due to a shared love of blowing things up and breaking hearts. You can learn more about Amie at amiekaufman.com or @AmieKaufman; look for Jay at jaykristoff.com or @misterkristoff.

Moderator: Mary Hinson is a senior library assistant and former book blogger based in Texas. When she's not purchasing YA books for the library or working on the North Texas Teen Book Festival, Mary is probably listening to an audiobook while playing video games set in space. You can find her on pages 328-335 of Gemina or on Twitter @knoxdiver creating themed booklists and cheering for the Dallas Stars.

An Afternoon with Oklahoma Authors, January 28th from noon to 2 p.m.

Something Storytime with Natalee Creech, February 25th at 11 a.m.

This feature require that you enable JavaScript in your browser.
END_OF_DOCUMENT_TOKEN_TO_BE_REPLACED

This feature require that you enable JavaScript in your browser.
END_OF_DOCUMENT_TOKEN_TO_BE_REPLACED