Best of Books is hosting a virtual event with author/illustrator Amy Kim Kibuishi to celebrate the release of her middle-grade graphic novel THE REMA CHRONICLES: REALM OF THE BLUE MIST!

Amy will be in-conversation with New York Times Bestselling author, Tui T. Sutherland as she celebrates the release of THE FLAMES OF HOPE (Wings of Fire #15)!

Thursday, April 7th at 7pm CT only on Best of Books' Facebook Live!

Get a SIGNED bookplate when you order below! 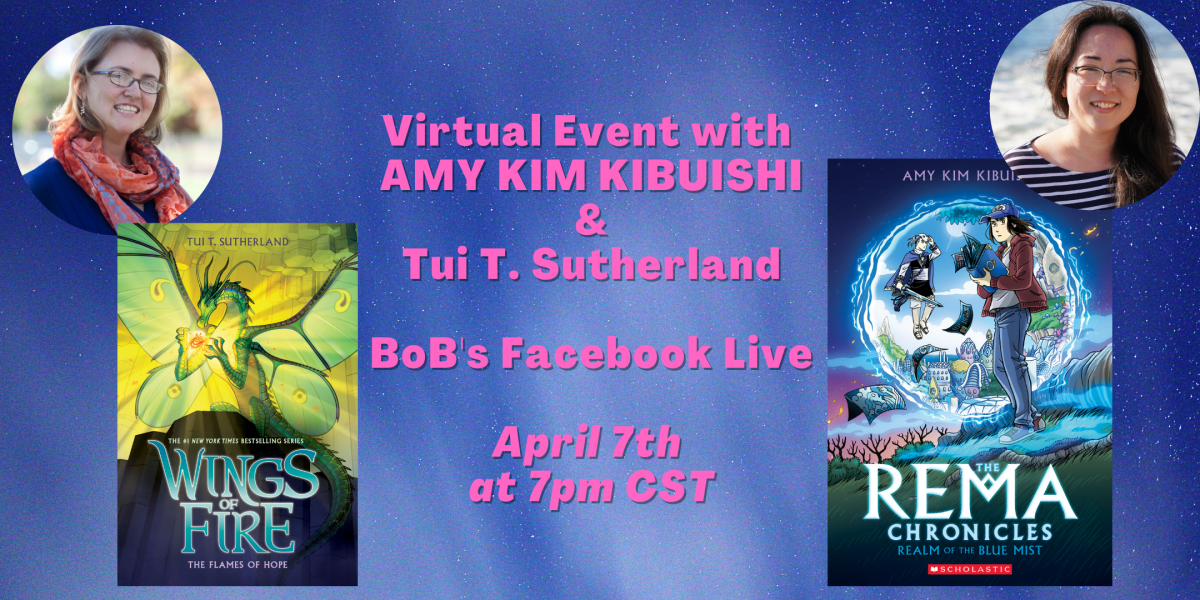 About Amy: Amy Kim Kibuishi has been drawing and writing in earnest since she was ten years old. She graduated from the School of Visual Arts with a degree in Cartooning and is the creator of Sorcerers & Secretaries, a graphic novel duology. The first volume was a YALSA Great Graphic Novels for Teens selection. She was also a contributor to the acclaimed Flight anthology series edited by Kazu Kibuishi, and adapted a story for Goosebumps: Terror Trips by R.L. Stine. Amy lives in Washington State with her husband, Kazu, and their two children.

About the book: Enter the rich and fantastical world of Rema in the first installment of this middle-grade graphic novel series with sweeping adventure and light romance!

Tabby Simon is determined to learn what happened to her father, who was found dead after researching a tree that leaks a mysterious mist in her neighborhood. She is unexpectedly led to Rema, a distant world of magic and beauty that is periodically invaded by a nearby planet desperate for resources. While Tabby searches for the truth surrounding her father's death, she meets a handsome blue-haired boy named Philip. He has his own dangerous secrets, but has promised to help Tabby get home. As she learns more about this strange world, Tabby discovers that she is destined for something far greater than she ever could have imagined.

About Tui T.: TUI T. SUTHERLAND is the author of the New York Times and USA Today bestselling Wings of Fire series, the Menagerie trilogy, and the Pet Trouble series, as well as a contributing author to the bestselling Spirit Animals and Seekers series (as part of the Erin Hunter team). In 2009, she was a two-day champion on Jeopardy! She lives in Massachusetts with her wonderful husband, two awesome sons, and two very patient dogs. To learn more about Tui's books, visit her online at tuibooks.com.

Realm of the Blue Mist: A Graphic Novel (The Rema Chronicles #1) (Paperback)

The Flames of Hope (Wings of Fire, Book 15) (Hardcover)

This feature require that you enable JavaScript in your browser.
END_OF_DOCUMENT_TOKEN_TO_BE_REPLACED

This feature require that you enable JavaScript in your browser.
END_OF_DOCUMENT_TOKEN_TO_BE_REPLACED