We hope you're ready to *book shimmy*! Best of Books and epic authors are coming together for an amazing reading event!

We couldn't be more excited for our incredible authors to join us for the Epic Reads Halloween Fantasy Meetup virtual event, share their brand-new novels, and talk everything books with you. Three attendees will also have a chance to win a $75 gift card to Best of Books during the event! 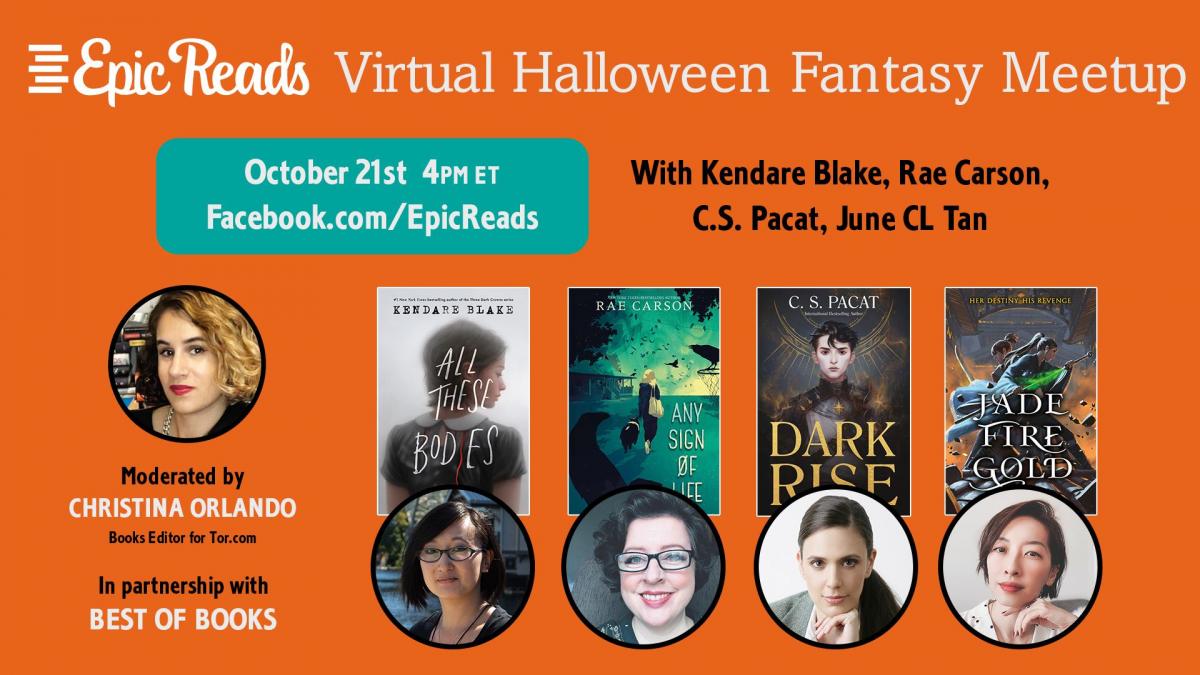 About the Books & Authors:

ALL THESE BODIES: Sixteen bloodless bodies. Two teenagers. One impossible explanation. In this edge-of-your-seat mystery from #1 New York Times bestselling author Kendare Blake, the truth is as hard to believe as it is to find.

Summer 1958. A gruesome killer plagues the Midwest, leaving behind a trail of bodies completely drained of blood.

Michael Jensen, an aspiring journalist whose father happens to be the town sheriff, never imagined that the Bloodless Murders would come to his backyard. Not until the night the Carlson family was found murdered in their home. Marie Catherine Hale, a diminutive fifteen-year-old, was discovered at the scene—covered in blood. She is the sole suspect in custody.

Michael didn’t think that he would be part of the investigation, but he is pulled in when Marie decides that he is the only one she will confess to. As Marie recounts her version of the story, it falls to Michael to find the truth: What really happened the night that the Carlsons were killed? And how did one girl wind up in the middle of all these bodies?

Kendare Blake is the #1 New York Times bestselling author of the Three Dark Crowns series. She holds an MA in creative writing from Middlesex University in northern London. She is also the author of Anna Dressed in Blood, a Cybils Awards finalist; Girl of Nightmares; Antigoddess; Mortal Gods; and Ungodly. Her books have been translated into over twenty languages, have been featured on multiple best-of-year lists, and have received many regional and librarian awards. Kendare lives and writes in Gig Harbor, Washington. Visit her online at www.kendareblake.com.

ANY SIGN OF LIFE: When a teenage girl thinks she may be the only person left alive in her town—maybe in the whole world—she must rely on hope, trust, and her own resilience. A harrowing and pulse-pounding survival story from New York Times–bestselling author Rae Carson. Any Sign of Life is a must-have for readers of Rick Yancey’s The 5th Wave and Neal Shusterman and Jarrod Shusterman's Dry.

Paige Miller is determined to take her basketball team to the state championship, maybe even beyond. But as March Madness heats up, Paige falls deathly ill. Days later, she wakes up attached to an IV and learns that the whole world has perished. Everyone she loves, and all of her dreams for the future—they’re gone.

But Paige is a warrior. She pushes through her fear and her grief and gets through each day scrounging for food, for shelter, for safety. As she struggles with her new reality, Paige learns that the apocalypse did not happen by accident. And that there are worse things than being alone.

New York Times–bestselling author Rae Carson tells a contemporary and all-too-realistic story about surviving against the odds in this near-future thriller. Any Sign of Life will electrify fans of Rory Power’s Wilder Girls and Emily St. John Mandel’s Station Eleven.

Rae Carson is the author of two bestselling and award-winning trilogies. Her debut, The Girl of Fire and Thorns, was named a William C. Morris Award finalist and an Andre Norton Award finalist. Walk on Earth a Strangerwas longlisted for the 2015 National Book Award and won the Western Writers of America Spur Award. Her books tend to contain adventure, magic, and smart girls who make (mostly) smart choices. Originally from California, Rae Carson now lives in Arizona with her husband. www.raecarson.com

DARK RISE: Sixteen-year-old dock boy Will is on the run, pursued by the men who killed his mother. Then an old servant tells him of his destiny to fight beside the Stewards, who have sworn to protect humanity if the Dark King ever returns. Will is thrust into a world of magic, where he starts training for a vital role in the oncoming battle against the Dark.

As London is threatened and old enmities are awakened, Will must stand with the last heroes of the Light to prevent the fate that destroyed their world from returning to destroy his own.

Like V.E. Schwab’s A Darker Shade of Magic and Shelby Mahurin’s Serpent & Dove, Dark Rise is more than just high intrigue fantasy—it’s fast-paced, action-packed, and completely surprising. Readers will love exploring the rich setting of nineteenth-century London. This thrilling story of friendship, deception, loyalty, and betrayal is sure to find a passionate audience of readers.

C. S. Pacat is the bestselling author of the Captive Prince trilogy and the graphic novel series Fence. She lives in Melbourne, Australia. Find her online at www.cspacat.com.

Ahn is no one, with no past and no family.

Altan is a lost heir, his future stolen away as a child.

When they meet, Altan sees in Ahn a path to reclaiming the throne. Ahn sees a way to finally unlock her past and understand her lethal magical abilities.

But they may have to pay a far deadlier price than either could have imagined.

A stunning homage to the Xianxia novel with dangerous magic, fast-paced action, and a delightful  romance, Jade Fire Gold isn’t one to miss!

June CL Tan writes science fiction and fantasy inspired by her childhood in multicultural Singapore, where she was raised on a diet of classic books and wuxia movies, caffeine, and congee. When she is not writing, she can be found wandering the streets of New York City in search of everyday mysteries and miracles. Jade Fire Gold is her first novel, and you can find her at www.junecltan.com.

All These Bodies (Hardcover)

This feature require that you enable JavaScript in your browser.
END_OF_DOCUMENT_TOKEN_TO_BE_REPLACED

This feature require that you enable JavaScript in your browser.
END_OF_DOCUMENT_TOKEN_TO_BE_REPLACED