An Evening with Gayle Forman & WE ARE INEVITABLE

Join Best of Books for an evening with New York Times Bestselling author Gayle Forman to celebrate the release of her newest book, WE ARE INEVITABLE!

Gayle Forman will be in-conversation with the book's audiobook narrator, Sunil Malhotra.

By registering for this event you are eligible to win a $100 Best of Books gift card as part of the “We Are Irreplaceable” independent bookstore campaign. Gayle Forman has partnered with BINC and Penguin Young Readers to donate a portion of the first week’s sales to BINC’s “Survive to Thrive” fundraising campaign that supports independent bookstores across the country. 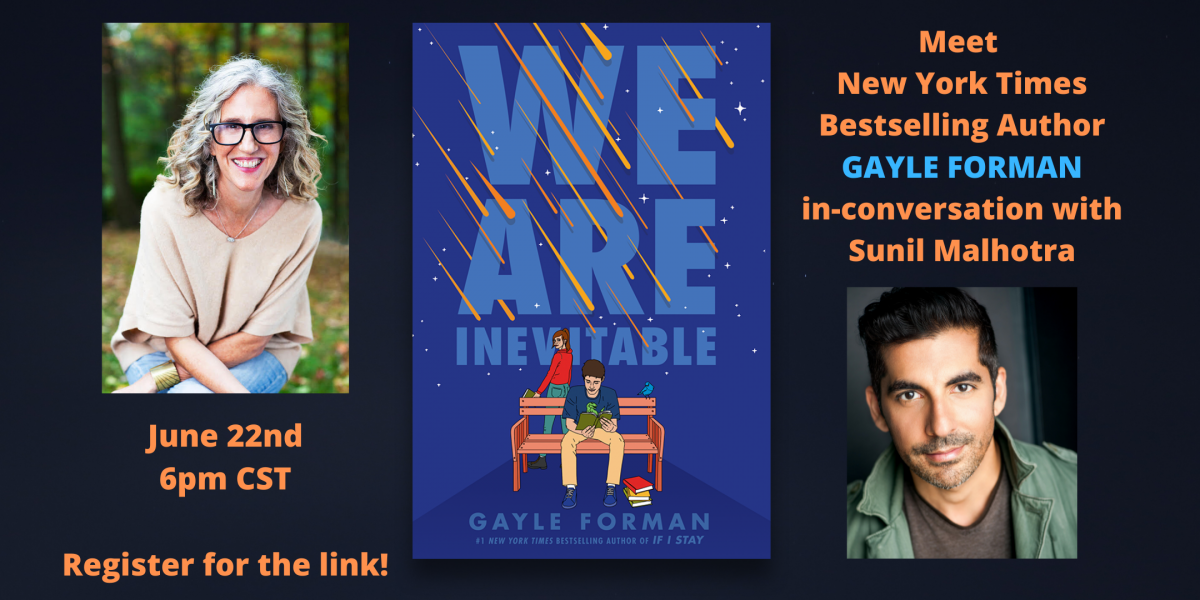 A poignant and uplifting novel about the power of community, from the #1 New York Times bestselling author of If I Stay.

Aaron Stein used to think books were miracles. But not anymore. Even though he spends his days working in his family’s secondhand bookstore, the only book Aaron can bear to read is one about the demise of the dinosaurs. It’s a predicament he understands all too well, now that his brother and mom are gone and his friends have deserted him, leaving Aaron and his shambolic father alone in a moldering bookstore in a crusty mountain town where no one seems to read anymore.

So when Aaron sees the opportunity to sell the store, he jumps at it, thinking this is the only way out. But he doesn’t account for Chad, a “best life” bro with a wheelchair and way too much optimism, or the town’s out-of-work lumberjacks taking on the failing shop as their pet project. And he certainly doesn’t anticipate meeting Hannah, a beautiful, brave musician who might possibly be the kind of inevitable he’s been waiting for.

All of them will help Aaron to come to terms with what he’s lost, what he’s found, who he is, and who he wants to be, and show him that destruction doesn’t inevitably lead to extinction; sometimes it leads to the creation of something entirely new.

Gayle Forman is an award-winning, internationally bestselling author and journalist. Her #1 New York Times bestselling novel If I Stay was adapted into a film starring Chloë Grace Moretz. In addition to landing the #1 spot on the New York Times bestsellers list, If I Stay has been translated into more than forty languages and received widespread critical acclaim. Entertainment Weekly called it “beautifully written,” and The Wall Street Journal raved, “The brilliance of this book is the simplicity.” Gayle is also the author of several other bestselling novels, including Where She Went, I Was Here, the Just One series, I Have Lost My Way, and Leave Me. Her essays and nonfiction work have appeared in publications like The New York Times, Elle, The Nation, and TIME. She lives in Brooklyn, New York, with her husband and daughters.

We Are Inevitable (Hardcover)

An Afternoon with Oklahoma Authors, June 26th from 12-2pm, In-Person!

This feature require that you enable JavaScript in your browser.
END_OF_DOCUMENT_TOKEN_TO_BE_REPLACED

This feature require that you enable JavaScript in your browser.
END_OF_DOCUMENT_TOKEN_TO_BE_REPLACED