Join Best of Books and New York Times Bestselling author Karen McManus to celebrate the release of YOU'LL BE THE DEATH OF ME! 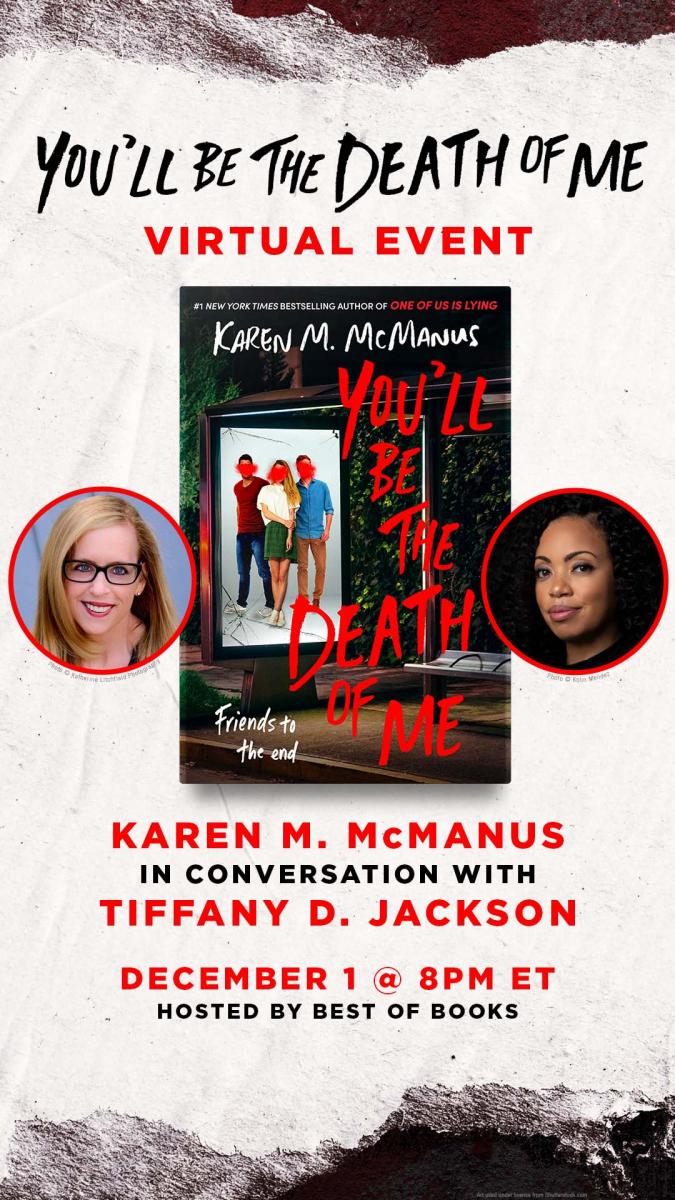 About the book: From the author of One of Us Is Lying comes a brand-new pulse-pounding thriller. It's Ferris Bueller's Day Off with murder when three old friends relive an epic ditch day, and it goes horribly—and fatally—wrong.

Ivy, Mateo, and Cal used to be close. Now all they have in common is Carlton High and the beginning of a very bad day.

Type A Ivy lost a student council election to the class clown, and now she has to face the school, humiliated. Heartthrob Mateo is burned out—he’s been working two jobs since his family’s business failed. And outsider Cal just got stood up . . . again.

So when Cal pulls into campus late for class and runs into Ivy and Mateo, it seems like the perfect opportunity to turn a bad day around. They’ll ditch and go into the city. Just the three of them, like old times. Except they’ve barely left the parking lot before they run out of things to say . . .

. . . until they spot another Carlton High student skipping school—and follow him to the scene of his own murder. In one chance move, their day turns from dull to deadly. And it’s about to get worse.

It turns out Ivy, Mateo, and Cal still have some things in common. They all have a connection to the dead kid. And they’re all hiding something.

Now they’re all wondering—could it be that their chance reconnection wasn’t by chance after all?

About the author: KAREN M. McMANUS earned her BA in English from the College of the Holy Cross and her MA in journalism from Northeastern University. She is the #1 New York Times bestselling author of One of Us Is Lying (now a television series on Peacock), Two Can Keep a Secret, One of Us Is Next, The Cousins, and You’ll Be the Death of Me. Her work has been published in more than 40 languages. To learn more about Karen and her books, visit karenmcmanus.com, or follow @writerkmc on Twitter and Instagram.

About the moderator: Tiffany D. Jackson is the New York Times bestselling author of Allegedly, Monday’s Not Coming, Let Me Hear a Rhyme, and Grown. A Walter Dean Myers Honor Book and Coretta Scott King John Steptoe New Talent Award winner, she received her bachelor of arts in film from Howard University, her master of arts in media studies from the New School, and has over a decade in TV/Film experience. The Brooklyn native still resides in the borough she loves. You can visit her at writeinbk.com.

You'll Be the Death of Me (Hardcover)

STORYTIME with Betty Selakovich Casey, December 18th at 11am

This feature require that you enable JavaScript in your browser.
END_OF_DOCUMENT_TOKEN_TO_BE_REPLACED

This feature require that you enable JavaScript in your browser.
END_OF_DOCUMENT_TOKEN_TO_BE_REPLACED