Best of Books hosts New York Times Bestselling author Kerri Maniscalco to celebrate the release of KINGDOM OF THE CURSED!

Kerri will be in-conversation with Zoraida Cordova!

Every copy ordered will be eligible for a 30-second meet-and-greet with Kerri after the Zoom event, along with a signed edition or signed bookplate!

The first 300 who order will receive a House Wrath tattoo with their book!

This is a private Zoom event, so register to save your spot HERE 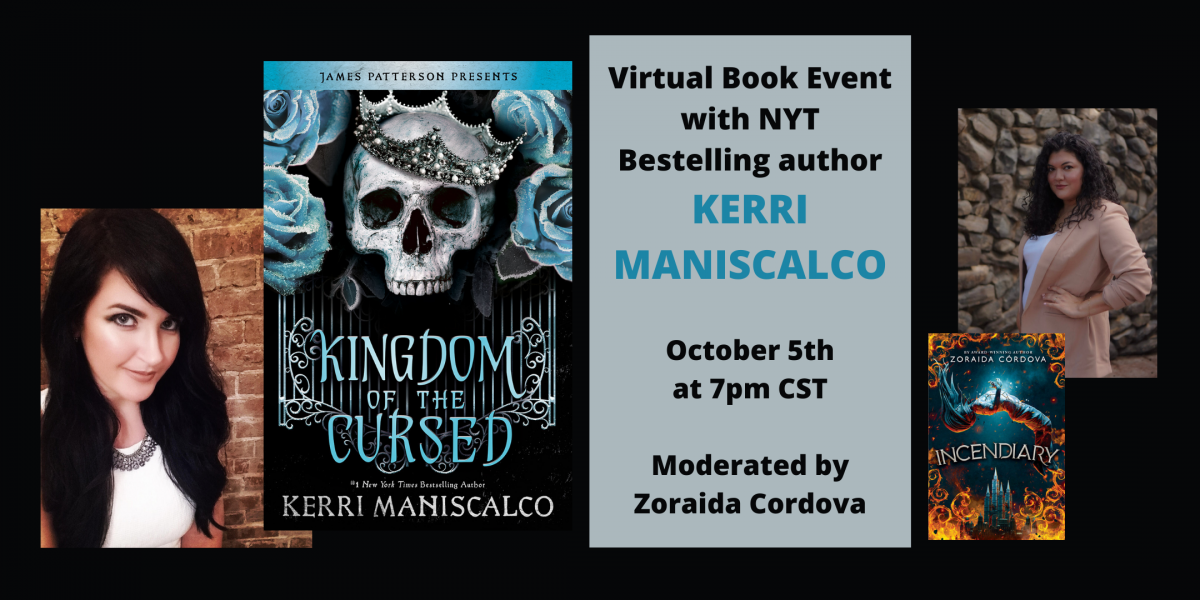 About the book: From New York Times bestselling author of Stalking Jack the Ripper Kerri Maniscalco comes the sizzling, sweepingly romantic sequel to Kingdom of the Wicked!

One sister.
Two sinful princes.
Infinite deception with a side of revenge…Welcome to Hell.

After selling her soul to become Queen of the Wicked, Emilia travels to the Seven Circles with the enigmatic Prince of Wrath, where she's introduced to a seductive world of vice.

She vows to do whatever it takes to avenge her beloved sister, Vittoria...even if that means accepting the hand of the Prince of Pride, the king of demons.

The first rule in the court of the Wicked? Trust no one. With back-stabbing princes, luxurious palaces, mysterious party invitations, and conflicting clues about who really killed her twin, Emilia finds herself more alone than ever before. Can she even trust Wrath, her one-time ally in the mortal world...or is he keeping dangerous secrets about his true nature?

Emilia will be tested in every way as she seeks a series of magical objects that will unlock the clues of her past and the answers she craves...

About the author: Kerri Maniscalco grew up in a semi-haunted house outside New York City, where her fascination with gothic settings began. In her spare time she reads everything she can get her hands on, cooks all kinds of food with her family and friends, and drinks entirely too much tea while discussing life's finer points with her cats. She is the author of the #1 New York Times bestselling Stalking Jack the Ripper quartet.

About the moderator: Zoraida Córdova is the award-winning author of Star Wars: A Crash of Fate, the Brooklyn Brujas series, and the Vicious Deep Trilogy. Her short fiction has appeared in the New York Times bestselling anthology Star Wars: From a Certain Point of View, and Toil & Trouble: 15 Tales of Women and Witchcraft. Zoraida was born in Ecuador and raised in Queens, New York. When she isn't working on her next novel, she's planning her next adventure .

This feature require that you enable JavaScript in your browser.
END_OF_DOCUMENT_TOKEN_TO_BE_REPLACED

This feature require that you enable JavaScript in your browser.
END_OF_DOCUMENT_TOKEN_TO_BE_REPLACED