The Life of Don Nickles

Join Best of Books' Joe Hight for a discussion with co-authors Bob Burke, Ryan Leonard and Don Nickles, about their book, The Life of Don Nickles.

This is a free event and will Live stream on Best of Books' Facebook page! 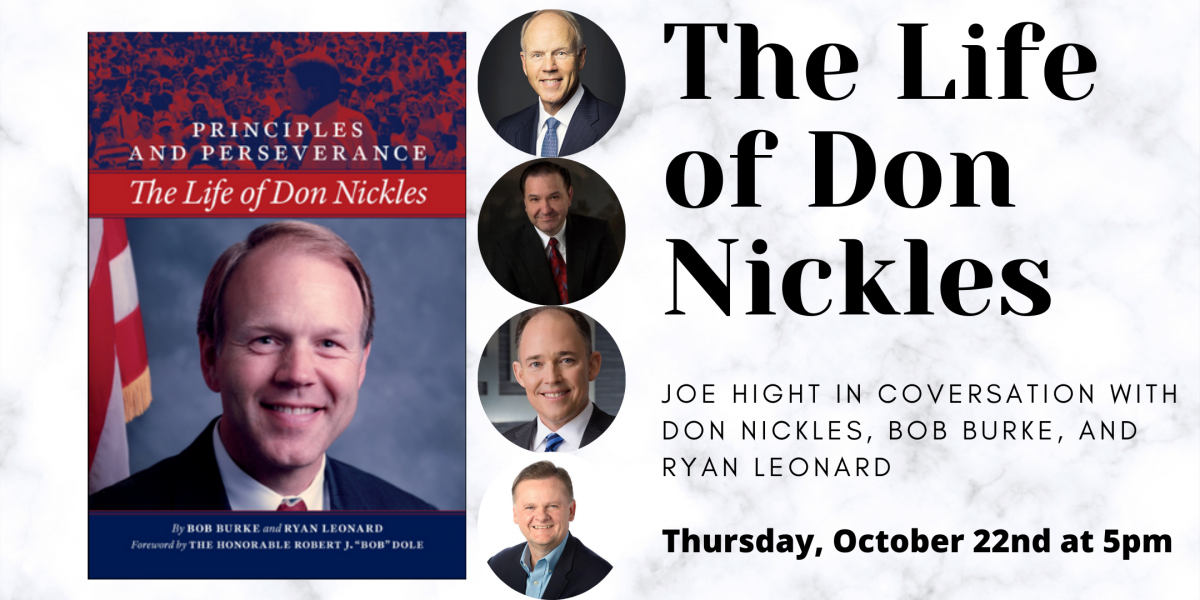 Don Nickles is a former Oklahoma State Senator and wielded more influence in Congress than any other Oklahoma Republican in history. He was the youngest Republican ever elected to the U.S. Senate, never lost an election and helped shape the Oklahoma Republican Party into what it is today. His pleasant personality and refusal to make political battles personal helped him win the respect of opponents as he climbed the leadership ladder. Along the way he served as chairman of the National Republican Senate Committee, chairman of the Senate Republican Policy Committee, and finally as Assistant Majority Leader. After his public service, Nickles stayed in the nation’s capital and formed a successful consulting group known as The Nickles Group.

Ryan Leonard is a fourth-generation native of Beaver in the Oklahoma Panhandle. An attorney and avid historian, Leonard began his career as a Legislative Assistant to U.S. Senator Don Nickles in Washington, D.C., returned to Oklahoma to serve as a state prosecutor in Canadian County, and presently is in the private practice of law in Oklahoma City. He is active in public and civic affairs across the state and serves as a commissioner representing Oklahoma on the national Uniform Law Commission. Leonard and his wife, Carrie, are the proud parents of four children—Catie, Will, Matthew, and Mary Frances.

Oklahoma native Bob Burke graduated from Broken Bow High School (1966), received a bachelor’s degree in journalism from the University of Oklahoma (1970), and a law degree from Oklahoma City University (1979). He began a career in radio at the age of 15 and was a disc jockey, radio journalist, and sportscaster for Oklahoma stations KBEL in Idabel, KOMA and KTOK in Oklahoma City, and ABC in New York City. Mr. Burke served in the administration of Governor David L. Boren, managed Boren’s campaign for the United States Senate in 1978, and then established his law practice in northwest Oklahoma City in 1980, specializing in workers’ compensation law and legislation. Among other numerous distinctions, he was honored as an Oklahoma County Pathmaker in 2002 and inducted to the Oklahoma Journalism Hall of Fame in 2003. In 2006 he received the prestigious lifetime achievement award from the Oklahoma Center for the Book. Bob Burke’s biography of Bryce Harlow was named the Outstanding Oklahoma History Book of the Year by the Oklahoma Historical Society. In 2005, his biography of Ralph Ellison was nominated for the Pulitzer Prize and as an Oklahoma Reads Oklahoma Book selection, and his book about traveling Oklahoma timber towns was named Book of the Year by the Oklahoma Museum Association.

Joe Hight is a journalist, writer, and educator. His nonfiction book, Unnecessary Sorrow, was released in the fall of 2019, and Our Greatest Journalists: Fifty Years of the Oklahoma Journalism Hall of Fame celebrates the contributions of our state’s journalists and their role in furthering the legacy of Oklahoma. Hight helped found the Dart Center for Journalism and Trauma, now based at Columbia University. He has led and been involved in projects that have won numerous national awards, including the Pulitzer Prize in 2014. He is the endowed chair of journalism ethics at the University of Central Oklahoma and director of the Oklahoma Journalism Hall of Fame, in which he is also a member. He writes a weekly column called “Oklahoma Joe” and his family owns Best of Books in Edmond, Oklahoma.

The Life of Don Nickles

This feature require that you enable JavaScript in your browser.
END_OF_DOCUMENT_TOKEN_TO_BE_REPLACED

This feature require that you enable JavaScript in your browser.
END_OF_DOCUMENT_TOKEN_TO_BE_REPLACED