Join Best of Books as we celebrate the release of two new novels, HOW TO BECOME A PLANET by Nicole Melleby, and THE DARKNESS OUTSIDE US by Eliot Schrefer!

This event is free and will stream live to BoB's Facebook Live! 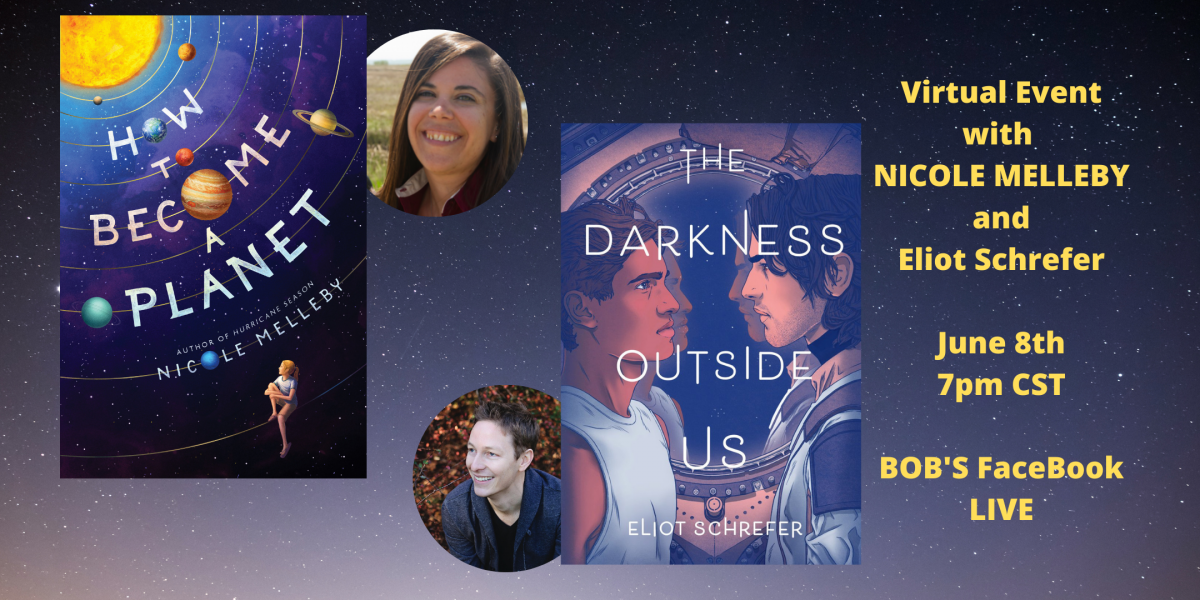 About HOW TO BECOME A PLANET: For Pluto, summer has always started with a trip to the planetarium. It’s the launch to her favorite season, which also includes visits to the boardwalk arcade, working in her mom’s pizzeria, and her best friend Meredith’s birthday party. But this summer, none of that feels possible.

A month before the end of the school year, Pluto’s frightened mom broke down Pluto’s bedroom door. What came next were doctor’s appointments, a diagnosis of depression, and a big black hole that still sits on Pluto’s chest, making it too hard to do anything.

Pluto can’t explain to her mom why she can’t do the things she used to love. And it isn’t until Pluto’s dad threatens to make her move with him to the city—where he believes his money, in particular, could help—that Pluto becomes desperate enough to do whatever it takes to be the old Pluto again.

She develops a plan and a checklist: If she takes her medication, if she goes to the planetarium with her mom for her birthday, if she successfully finishes her summer school work with her tutor, if she goes to Meredith’s birthday party . . . if she does all the things that “normal” Pluto would do, she can stay with her mom in Jersey. But it takes a new therapist, a new tutor, and a new (and cute) friend with a checklist and plan of her own for Pluto to learn that there is no old and new Pluto. There’s just her.

About THE DARKNESS OUTSIDE US:

They Both Die at the End meets The Loneliest Girl in the Universe in this mind-bending sci-fi mystery and tender love story about two boys aboard a spaceship sent on a rescue mission, from two-time National Book Award finalist Eliot Schrefer.

Ambrose wakes up on the Coordinated Endeavor with no memory of a launch. There’s more that doesn’t add up: evidence indicates strangers have been on board, the ship’s operating system is voiced by his mother, and his handsome, brooding shipmate has barricaded himself away. But nothing will stop Ambrose from making his mission succeed—not when he’s rescuing his own sister.

In order to survive the ship’s secrets, Ambrose and Kodiak will need to work together and learn to trust each other . . . especially once they discover what they are truly up against. Love might be the only way to survive.

About the Authors: Nicole Melleby is a born-and-bred Jersey girl with a passion for storytelling. She studied creative writing at Fairleigh Dickinson University and currently teaches creative writing and literature courses with a handful of local universities. When she’s not writing, she can be found browsing the shelves at her local comic shop or watching soap operas with a cup of tea.

Eliot Schrefer is a New York Times-bestselling author, and has twice been a finalist for the National Book Award. In naming him an Editor’s Choice, the New York Times has called his work “dazzling… big-hearted.” He is also the author of two novels for adults and four other novels for children and young adults. His books have been named to the NPR “best of the year” list, the ALA best fiction list for young adults, and the Chicago Public Library’s “Best of the Best.” His work has also been selected to the Amelia Bloomer List, recognizing best feminist books for young readers, and he has been a finalist for the Walden Award and won the Green Earth Book Award and Sigurd Olson Nature Writing Award. He lives in New York City, where he reviews books for USAToday.

How to Become a Planet (Hardcover)

The Darkness Outside Us (Hardcover)

An Afternoon with Oklahoma Authors, June 26th from 12-2pm, In-Person!

This feature require that you enable JavaScript in your browser.
END_OF_DOCUMENT_TOKEN_TO_BE_REPLACED

This feature require that you enable JavaScript in your browser.
END_OF_DOCUMENT_TOKEN_TO_BE_REPLACED