This event is free and open to the public.

Thursday, November 18th at 6pm at Best of Books! 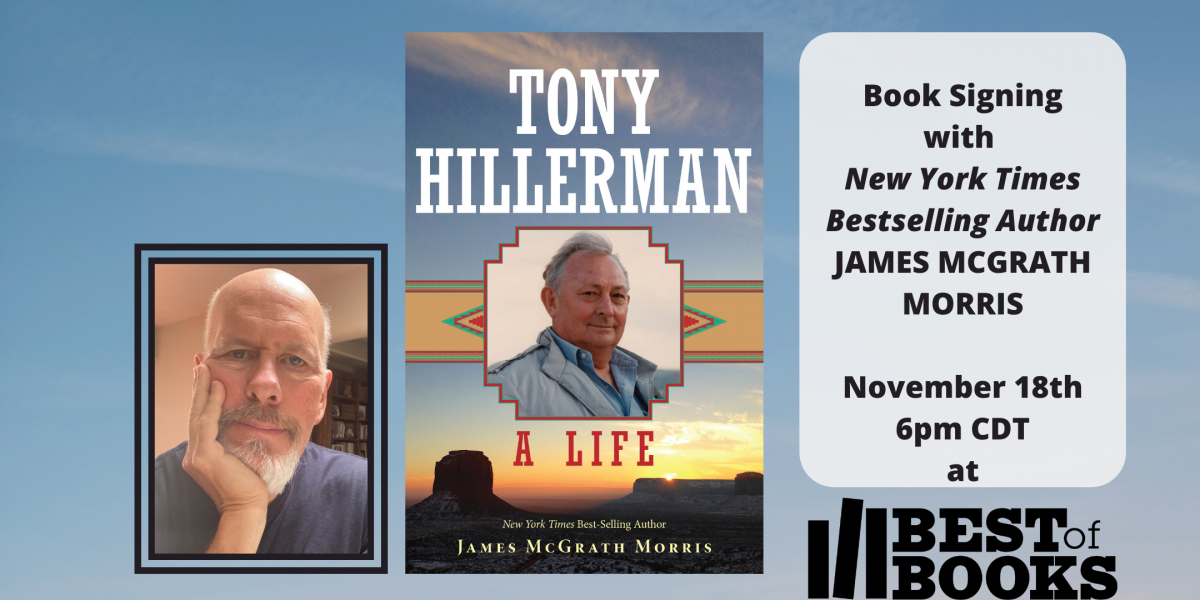 About the book: The author of eighteen spellbinding detective novels set on the Navajo Nation, Tony Hillerman simultaneously transformed a traditional genre and unlocked the mysteries of the Navajo culture to an audience of millions. His best-selling novels added Navajo Tribal Police detectives Joe Leaphorn and Jim Chee to the pantheon of American fictional detectives.

Morris offers a balanced portrait of Hillerman’s personal and professional life and provides a timely appreciation of his work. In intimate detail, Morris captures the author’s early years in Depression-era Oklahoma; his near-death experience in World War II; his sixty-year marriage to Marie; his family life, including six children, five of them adopted; his work in the trenches of journalism; his affliction with PTSD and its connection to his enchantment with Navajo spirituality; and his ascension as one of America’s best-known writers of mysteries. Further, Morris uncovers the almost accidental invention of Hillerman’s iconic detective Joe Leaphorn and the circumstances that led to the addition of Jim Chee as his partner.

Hillerman’s novels were not without controversy. Morris examines the charges of cultural appropriation leveled at the author toward the end of his life. Yet, for many readers, including many Native Americans, Hillerman deserves critical acclaim for his knowledgeable and sensitive portrayal of Diné (Navajo) history, culture, and identity.

At the time of Hillerman’s death, more than 20 million copies of his books were in print, and his novels inspired Robert Redford to adapt several of them to film. In weaving together all the elements of Hillerman’s life, Morris drew on the untapped collection of the author’s papers, extensive archival research, interviews with friends, colleagues, and family, as well as travel in the Navajo Nation. Filled with never-before-told anecdotes and fresh insights, Tony Hillerman will thrill the author’s fans and awaken new interest in his life and literary legacy.

About the author: James McGrath Morris is an award-winning and New York Times best-selling author. His books include The Ambulance Drivers: Hemingway, Dos Passos, and a Friendship Made and Lost in War; Eye on the Struggle: Ethel Payne, the First Lady of the Black Press; and Pulitzer: A Life in Politics, Print, and Power. He lives in Santa Fe, New Mexico.

STORYTIME with Betty Selakovich Casey, December 18th at 11am

This feature require that you enable JavaScript in your browser.
END_OF_DOCUMENT_TOKEN_TO_BE_REPLACED

This feature require that you enable JavaScript in your browser.
END_OF_DOCUMENT_TOKEN_TO_BE_REPLACED