Join Best of Books and critically acclaimed author, June Hur celebrate the launch of her newest novel, THE RED PALACE!

June will be in conversation with New York Times Bestselling author Joan He!

This event is free and private. Please register here to access the link! 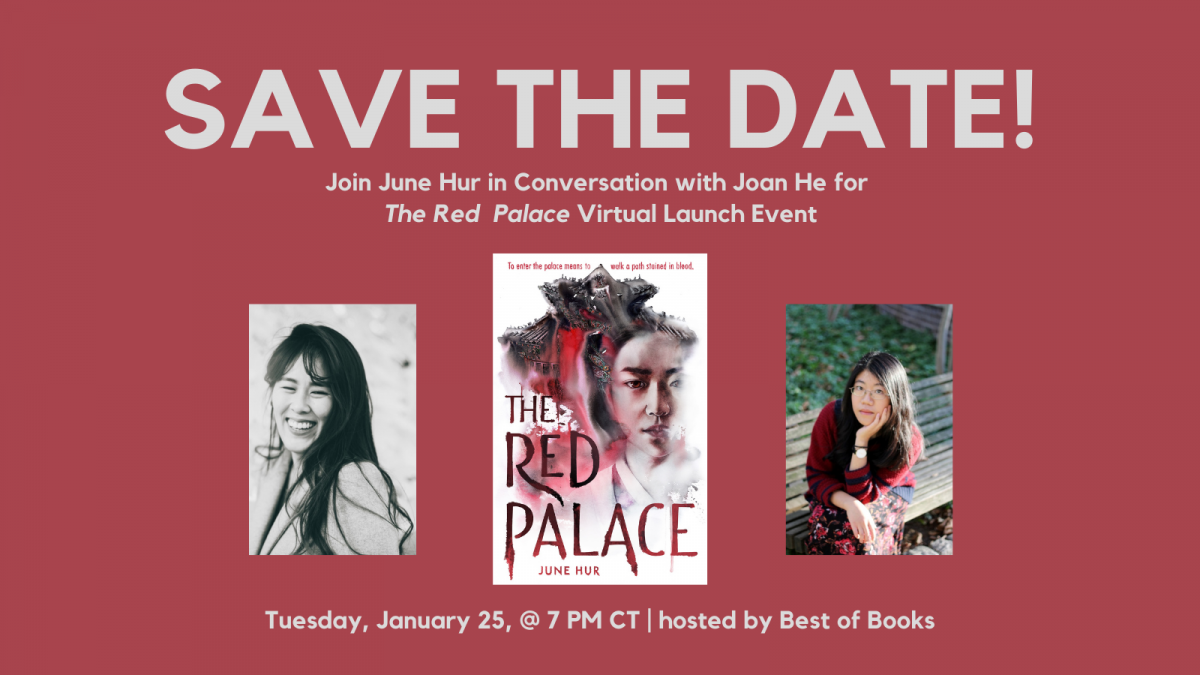 About the author: June Hur was born in South Korea and raised in Canada, except for the time when she moved back to Korea and attended high school there. She studied History and Literature at the University of Toronto. She began writing her debut novel after obsessing over books about Joseon Korea. When she’s not writing, she can be found wandering through nature or journaling at a coffee shop. She is the author of The Silence of Bones, The Forest of Stolen Girls, The Red Palace, and A Crane Among Wolves published by Feiwel & Friends/Macmillan, and she currently lives in Toronto with her husband and daughter.

June Hur, critically acclaimed author of The Silence of Bones and The Forest of Stolen Girls, returns with The Red Palace—a third evocative, atmospheric, & romantic historical mystery perfect for fans of Courtney Summers and Kerri Maniscalco.

Joseon (Korea), 1758. There are few options available to illegitimate daughters in the capital city, but through hard work and study, seventeen-year-old Hyeon has earned a position as a palace nurse. All she wants is to keep her head down, do a good job, and perhaps finally win her estranged father’s approval.

But Hyeon is suddenly thrust into the dark and dangerous world of court politics when someone murders four women in a single night, and the prime suspect is Hyeon’s closest friend and mentor. Determined to prove her beloved teacher’s innocence, Hyeon launches her own secret investigation.

In her hunt for the truth, she encounters Eojin, a young police inspector also searching for the killer. When evidence begins to point to the Crown Prince himself as the murderer, Hyeon and Eojin must work together to search the darkest corners of the palace to uncover the deadly secrets behind the bloodshed.

About the moderator: Joan He was born and raised in Philadelphia but still will, on occasion, lose her way. At a young age, she received classical instruction in oil painting before discovering that storytelling was her favorite form of expression. She studied Psychology and East Asian Languages and Cultures at the University of Pennsylvania and currently writes from a desk overlooking the Delaware River. She is the New York Times bestselling author of The Ones We're Meant to Find, Descendant of the Crane, and the forthcoming Strike the Zither, releasing from Macmillan on November 8, 2022.

This feature require that you enable JavaScript in your browser.
END_OF_DOCUMENT_TOKEN_TO_BE_REPLACED

This feature require that you enable JavaScript in your browser.
END_OF_DOCUMENT_TOKEN_TO_BE_REPLACED