Order a copy of the books below and get a signed bookplate! 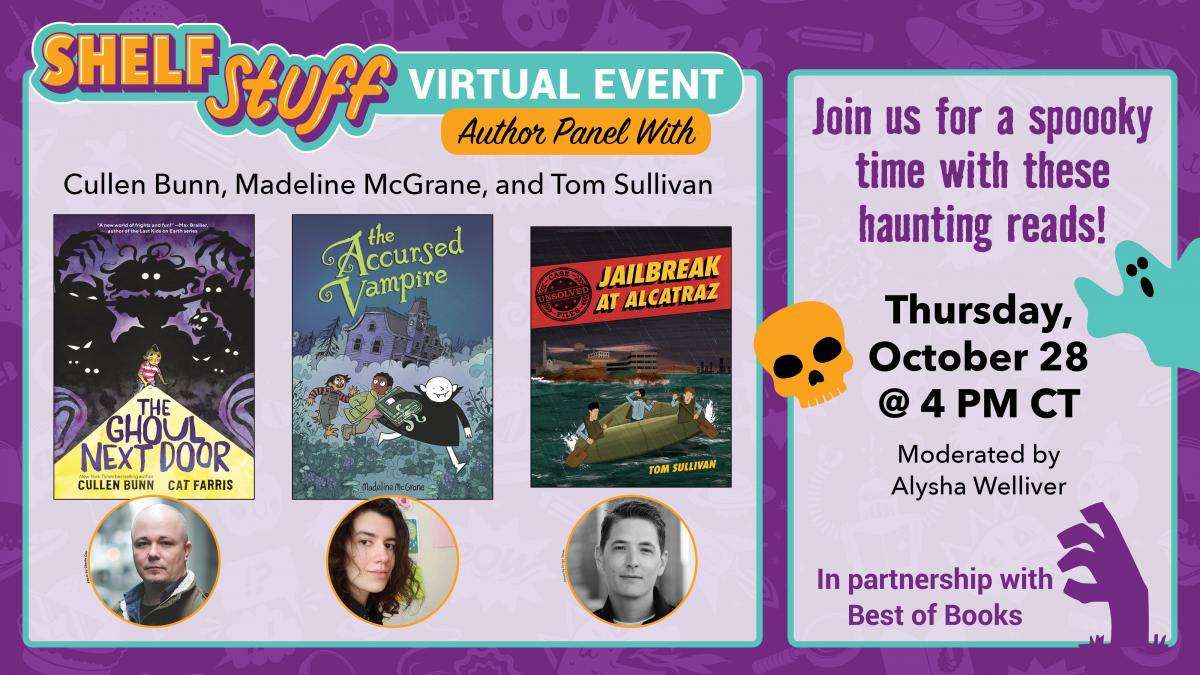 THE GHOUL NEXT DOOR

Eleven-year-old Grey lives in the legend-haunted New England town of Ander’s Landing, and he can’t help but feel like a pair of eyes is watching his every move.

He discovers odd, gruesome bits and pieces from the graveyard that are left for him as gifts like art carved from bones or jewelry made from (hopefully not human) remains. Soon Grey is caught up in something bigger than he could ever have imagined.

He finds himself drawn into a strange mystery involving a race of reclusive subterranean creatures—ghouls, the eaters of the dead! Turns out, his secret admirer is a ghoul named Lavinia. An unlikely friendship forms between them. The only problem is, their friendship breaks traditions—and the punishment is a fate worse than death.

Author: Cullen Bunn is the New York Times bestselling writer of the Sixth Gun, Harrow County, Bone Parish, and Dark Ark; Bunn has written for Marvel, DC, Valiant, and many others. Bunn considers himself a lucky husband and father, and was once the world’s youngest hypnotist. Visit him online at www.cullenbunn.com.

Artist: Cat Farris is a native Portlander, an artist, and pretty sure she’s just making this up as she goes along. She is supported in this venture by the world’s most beautiful husband, the laziest greyhound, and an all-star cast of Helioscope studio mates. She has done art for various comics publishers, including Oni Press, Dark Horse Comics, and IDW Publishing. You can see more of her work at www.cattifer.com

Dragoslava is a vampire kid. It has its perks, but sometimes being stuck as a kid forever can be a pain in the neck. And that’s not even the worst part. A few centuries ago, Drago was cursed by a witch. If they don’t complete every task she sets, they will be turned into worms.

When the witch wants a spellbook from Baneberry Falls, Drago sets off with their immortal friends. But mysteries await in this sleepy Midwestern town, and Drago must figure out if the keepers of the spellbook have a hidden agenda, like everyone else they’ve ever known.

One thing’s for sure: after this accursed mission, Drago’s immortal life will never be the same again!

Author: Madeline McGrane lives in Minneapolis and draws comics. She received her BFA from Minneapolis College of Art and Design in 2016. She has worked for Marvel Comics, Disney Publishing and CollegeHumor. Her short comic, Iceheist was published by uncivilized books in 2015. This is her debut graphic novel. Find her online at https://madelinemcgrane.com/

The second book in this graphic nonfiction series about real FBI cases is a gripping account of an escape from Alcatraz, the infamous island prison.

A corrections officer at Alcatraz Federal Penitentiary tries to awaken inmate AZ-1441, Frank Morris. But when he shakes the unresponsive man, his head rolls off the pillow and crashes to the floor! Soon the guards realize that Morris and two other inmates, brothers John and Clarence Anglin, had done the seemingly impossible: escaped from the notorious island prison.

This is the incredible true story of the daring and inventive escape and a decades-long manhunt in a case that remains unsolved to this day.

Comics panels, reproductions of documents from real FBI files, and photos from the investigation combine for a thrilling read for sleuths of all ages.

Author: Tom Sullivan is the author and illustrator of Unsolved Case Files: Escape from 10,000 Feet, and of the picture books Out There, Blue vs. Yellow, and I Used to Be a Fish. He resides with his family in Boston, MA. You can visit Tom online at www.thomasgsullivan.com.

The Ghoul Next Door (Paperback)

This feature require that you enable JavaScript in your browser.
END_OF_DOCUMENT_TOKEN_TO_BE_REPLACED

This feature require that you enable JavaScript in your browser.
END_OF_DOCUMENT_TOKEN_TO_BE_REPLACED