Heather will be in-conversation with her Pitch Wars mentors, Layne Fargo and Halley Sutton.

This event is free and will be stremed lived to BoB's Facebook Live! 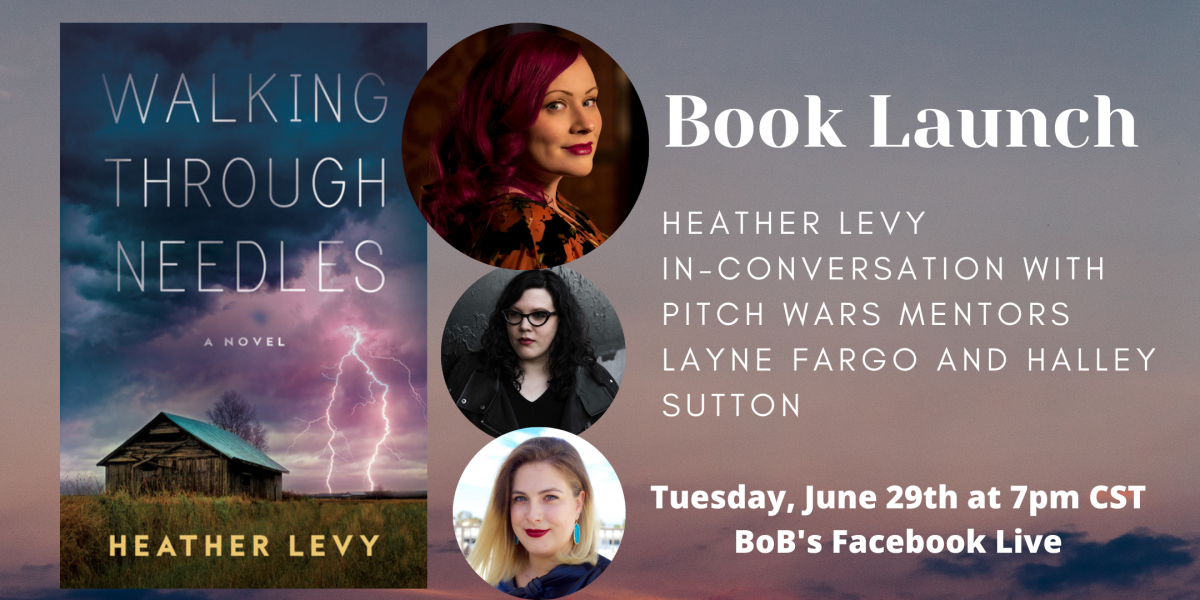 Walking Through Needles, out June 29th through Polis Books, is a dark debut psychological thriller perfect for fans of Gillian Flynn, S.J. Watson, and Megan Abbott.

From an early age, Sam Mayfair knew she was different. Like any young girl, she developed infatuations and lust—but her desires were always tinged with darkness. Then, when Sam was sixteen, her life was shattered by an abuser close to her. And she made one shocking decision whose ramifications would reverberate throughout her life.

Now, fifteen years later, Sam learns that her abuser has been murdered. The death of the man who plagued her dreams for years should have put an end to the torture she's endured. But when her stepbrother, Eric, becomes the prime suspect, Sam is flung back into the hell of her rural Oklahoma childhood. As Sam tries to help exonerate Eric, she must hide terrifying truths of their past from investigators. Yet as details of the murder unravel, Sam quickly learns that some people, including herself, will do anything to keep their secrets buried deep. Walking Through Needles is a riveting and unflinching look at violence, sexuality, and desire from a compelling and unforgettable new voice.

Booklist calls Walking Through Needles a “midnight exercise in noir fiction that is carefully executed and fascinating in a reptilian way...a dark success.”

Jenny Lee and her editor, May 4th at 7pm on BoB's Facebook Live

Tricia Levenseller and Marissa Meyer, May 7th at 7pm (Zoom)

Kris Calvin, May 11th at 7pm on BoB's Facebook Live

Case Bazay, May 13th at 7pm on BoB's Facebook Live

Michael Buckley, May 14th at 7pm on BoB's Facebook Live

Juliana Brandt, May 17th at 7pm on BoB's Facebook Live

Ethan Berlin, May 18th at 1pm at 7pm on BoB's Facebook Live--Special Storytime

Alyson Gerber and Jerrett Lerner, May 19th at 7pm on BoB's Facebook Live

Erica George, May 27th at 4pm on BoB's Instagram Live

This feature require that you enable JavaScript in your browser.
END_OF_DOCUMENT_TOKEN_TO_BE_REPLACED

This feature require that you enable JavaScript in your browser.
END_OF_DOCUMENT_TOKEN_TO_BE_REPLACED